Held at the offices of Hogan Lovells LLP in London on 8th May, the event was hosted by TV presenter and broadcaster Nomia Iqbal.

In front of a capacity crowd, the students pitched their ideas to a judging panel including David Hudd, partner and Deputy CEO of Hogan Lovells; Charrlottes De’Davis, Co-Founder of The Bardou; Dr Peter Englander, Co-CEO of the Apax Foundation; Hussein Kanji, Founding Partner of Hoxton Ventures and Asif Zubairy, ITV Commissioning Editor of Entertainment

Over 3100 secondary school pupils from nearly 70 schools across the country participated in the competition before the final six were shortlisted to compete in the Grand Finals. Over 350 volunteer business mentors from organisations such as Marks & Spencer, HSBC, Jaguar Land Rover, PwC and Ernst & Young were allocated to the teams.

As part of the event, Nomia Iqbal also hosted a fascinating Q&A session with special guest Jamal Edwards MBE – entrepreneur founder of SB.TV and a Prince’s Trust ambassador. Jamal spoke of the obstacles he has overcome so far in his career and inspired the audience by sharing insights of his approach to business, first and foremost pursuing something he was passionate about.

The students from Eden Girls School, Waltham Forest impressed the judging panel with their winning business concept, Team Ed-Wise. Their idea was to disrupt the current substitute teacher market by creating a new online market-place for schools to find quality supply teachers directly, disregarding the use of agencies and the high rates of commission associated with them.

As a result of the win, the team has secured a £2,500 cash prize for the school and a £500 seed fund to start up their business. Team Ed-Wise were also whisked off immediately after their win in wonderful Rolls Royce Phantom cars supplied very generously by Smart City Prestige Cars to the ITN Studios, for a behind the scenes tour and meet and greet with some of their most notable presenters including Rageh Omaar from ITV and Sian Williams from Channel 5. The other finalist teams went to the sustainable food hall Mercato Metropolitano, where they were given a private tour of one of London’s most successful social enterprises and sampled some of the delicious produce available. They then joined the winning team at the stunning Sky Gardens.

“Huge congratulations to the winning team from Eden Girls School, Waltham Forest, who have been outstanding all the way throughout the challenge. We can’t wait to see what they do with their start up! It was a very close decision in the end and all six participating teams did their schools, their region, their mentors and themselves proud.

“Thanks again to everyone who has made the Mosaic Enterprise Challenge a huge success this year, not least of all the hundreds of business mentors that freely give their time to support the young people involved, and our sponsors.”

Chairman of Judges, David Hudd said: “It has been a great Grand Finals! We all at Hogan Lovells are so very proud to be associated with Enterprise Challenge and the work of Mosaic at The Prince’s Trust. Every year the ideas get better and the job of the judges get harder!”

The winning Team said: “We smashed nationals! We can’t even explain how amazing it feels. But seriously we want to thank our mentors Mr Khan and Holly for helping us along the way. We really don’t think we would have won without them!”

Keynote speaker Jamal Edwards MBE congratulated the winning team: “I thought all of them were amazing and did a great job representing their regions. The pitches were funny, energetic and confident and I was so impressive!”

In second place was Team Well Kitchen from Dixons Kings Academy, representing Yorkshire and in third place, Team Companion from Ladybridge High School representing the North West. In return for their achievements, both teams of students secured a cash prize of £2,000 and £1,000 respectively for their schools. The other teams in the incredibly close final were from Shawlands Academy, Grace Academy Coventry and Lynch Hill Enterprise Academy.

It’s not too early to register your interest to become a mentor on the Enterprise Challenge or to sign your school up to take part in 2018/19. Find out more here. 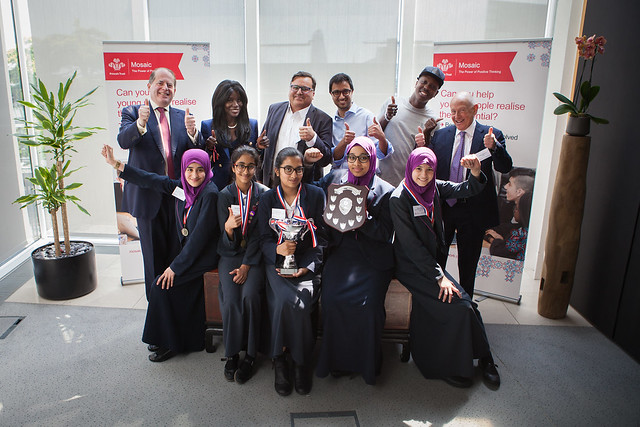