An event was held at Thomas Goode & Co, London on Tuesday 10th October to formally mark the 10th anniversary of Mosaic.

Mosaic was founded by HRH The Prince of Wales in 2007 to connect young people from the UK’s most deprived communities to relatable role models, with the aim to help increase their confidence and improve their chances of fulfilling their potential. In the last 10 years, Mosaic has worked across 1,448 schools and prisons with the help of over 7,000 mentors and has benefited over 40,000 young people. 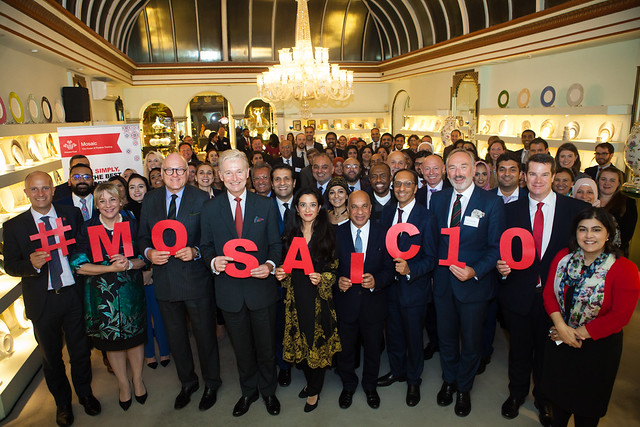 In addition, some of the young people who have been supported by Mosaic over the years also told their stories. One of these young people was Mariam Al-Kayssi, 19 years old from Paddington, London. Mariam recently started university embarking on her dream aeronautical engineering degree having started her mentoring journey on the Secondary School Mentoring Programme when she was 13 years old. She received mentoring from Maz Majid, Supply Chain Director Clothing & Home at Marks & Spencer.

Mariam said: “At first I thought that he (Maz) wasn’t going to help me much and that Mosaic wouldn’t help me either, but then once I started attending the sessions, I wanted more. The best thing about Mosaic is that it does really affect you in a positive way, it also opens up lots of opportunities and vital contacts for the future, and the educational visits are just out of this world. I enjoyed the whole journey, from getting to know my mentor to meeting people, visiting places and networking.”

Before she took part in Mosaic’s mentoring programme, by her own admission, Mariam was incredibly shy. Taking part in the Mosaic programme has helped build her self-confidence, develop her imaginative and creative skills and also taught her many new skills. Now, Mariam is really excited about her future and looking forward to the opportunities and experiences that she now knows will come, starting with her university journey.

The Mayor of London Sadiq Khan, who regretfully was unable to attend on the evening, wrote in a letter read aloud at the event: “I am proud to be a long-standing supporter and ambassador of Mosaic’s work. The achievements of Mosaic in helping tens of thousands of young people from some of our most disadvantaged communities increase their life chances, including many here in London, is something you should all be proud of.”

Nick Stace, Chief Executive of The Prince’s Trust UK said: “We are thrilled to celebrate the 10th anniversary of Mosaic and its incredible achievements. We are proud that such a vital initiative joined The Prince’s Trust a year ago. The Prince’s Trust has helped over 870,000 young people over the last 41 years, but we know many more still need our help, in particular those who live in the UK’s most deprived communities. We cannot do this alone and we hope that people will feel inspired to become mentors, so that we can continue the important work of our Mosaic initiative.”